The girl in the blue dress, daughter of the late Dr. David Hall, is portraying Rosalie Beekman during the 2000 Angels on the Bluff tour. Rosalie was 7 years old when the Union gunboat U.S.S. Essex bombarded Natchez on September 2, 1862.

Her parents, Fanny and Aaron Beekman operated 1 of the businesses on Silver Street Under-the-Hill when Natchez came under bombardment.

As the family, and most all of the people Under-the-Hill, ran to flee the bombardment Rosalie was hit and fell to the ground mortally wounded. 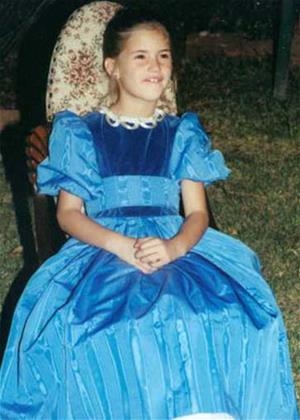 When her father called for her to get up and run she replied, “I can’t Papa, I’m killed”. She died the following day. Rosalie became the only person to die from hostile action in Natchez during the Civil War.