A. V. Davis V of Natchez portrayed Don Jose Vidal during the 2000 Angels on the Bluff tour. Davis is an ancestor of Vidal.

Dressed in a Spanish uniform of the era, Mr. Davis gave interesting information about Vidal who served as Spanish Consul for the Spanish Crown where he filled many offices of trust for the Royal Government of the Louisiana Province. 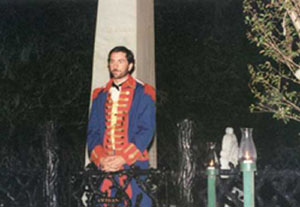 After the Spanish handed over the Natchez District to the Americans in 1798, Vidal continued serving as Spanish Consul at Natchez.

In 1798, Don Jose Vidal petitioned the Governor General at New Orleans for 3 grants of land on the west bank of the Mississippi River for himself and his 2 sons. The Governor signed these grants with the stipulation that the grants should be surveyed and that "should they be opposite the landing and Plaza of Natchez... shall be reserved for the purpose of building a strong house" (fort.) The fort was built, and is described in early records as the "Post of New Concordia," the "Post of Concord," and the adjacent territory is referred to as "Concordia."

The name "Concord" appears to have originated in Natchez. During the regime of de Lemos as Governor at Natchez, he built a magnificent residence, to which he gave the name "Concord."

Upon his removal to New Orleans, de Lemos sold his mansion to Don Stephen Minor. Since “Concord” was the most historic residence in Mississippi, it is probable that the "Post of Concord" derived its name from this residence.

After the Louisiana Purchase, in 1803, a ceremony of transfer took place at the "Post of Concord" on January 12, 1804. The Mayor, Council, and many citizens of Natchez crossed the river to witness the event. At that time there were no public buildings on the west bank of the Mississippi River. The home of Vidal had been used as "The Government House."