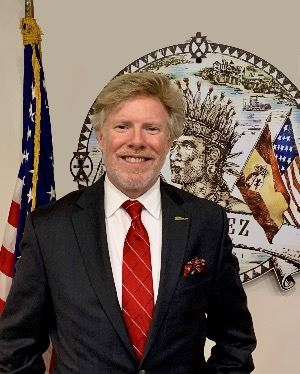 Dan M. Gibson was elected Mayor of Natchez in July, 2020 with almost 64% of the vote and solid support from every demographic. As Mayor, Dan works tirelessly every day for all citizens of Natchez. He is committed to building a better city where Unity is celebrated and with it, Community and Opportunity.

Having guided the city already through the challenges of a national pandemic, two hurricanes, and a historic winter storm, Dan has worked to set Natchez on a path where difficulties spur achievement to higher success. History is happening once again in this shining city on the river’s highest hill. This rebirth is being called “The Natchez Renewal”, and truly great days are now on the horizon.

Dan has not always lived in this beautiful city. He grew up in Jackson, Mississippi, the youngest of four boys. His father was a WWII Veteran and US Postal Worker. His mother was a homemaker and an entrepreneur. There he attended the Jackson Public Schools, graduating from Murrah High School in 1983, where he served as both Student Body President and Editor of the School Newspaper.

Upon graduation, Dan pursued a career in real estate prior to entering the insurance profession in 1994 as an independent agent. That same year his son, Daniel Clark was born. As President of Copiah County Insurance Agency, Dan was named to the Mississippi Business Journal’s “Top Forty Under Forty” and was later twice elected mayor of Crystal Springs, serving for a time as the youngest Mayor in Mississippi. He made a run for Governor in 1999 at the age of 34.

In 2001, Dan obtained his Series 7 as a financial consultant and started his own insurance consulting company. In the years that followed, he served as Risk Manager for Hinds County, Mississippi’s largest county. There, he managed all insurance programs and administered a multi-million dollar self-insured health program for the county’s prison system. In this role he managed care for nearly 1000 inmates and reported savings of public funds in the millions of dollars.

During this time, Dan was tapped to serve as Executive Director for the MS Association of Self-Insurers, a statewide insurance advocacy group. For almost fourteen years, Dan served as a lobbyist for hundreds of employers with millions in annualized premiums. He represented their concerns before the Mississippi Legislature, Mississippi Insurance Department and Mississippi Workers’ Compensation Commission. In 2012, Dan worked closely with other private entities and legislative leaders to obtain passage of Mississippi’s Historic Workers’ Comp Reform Bill – bringing about many important changes for the benefit of employers and employees alike.

Acting on a lifelong passion for Natchez, Dan began investing in the city’s economy in 2016, the same year making Natchez his permanent home. He now owns several properties in the hospitality industry, and his passion for Natchez continues with his service as Mayor.

“We Can” has become Dan’s motto. And the City of Natchez is now beginning to flourish under his positive leadership.