During the 2000 Angels on the Bluff Tour Willie Minor portrayed Clarence "Bud" Scott who was born a slave in Natchez, which he continued to call home throughout a musical career that took him to New York, Chicago, Los Angeles and many other places around the nation. 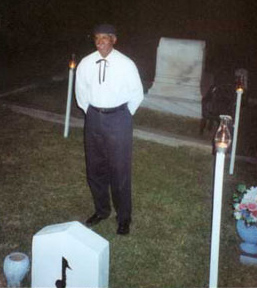 Family members have told stories of Scott's early interest in music and dancing and of the first instrument he played a mandolin.

One of the most widely known stories about Scott is his relationship with Natchez Police Chief Mike Ryan, an Irishman and ardent fan of the musician. Scott often played from the balcony of one of the downtown buildings. If Scott would see the chief walking by he would cue the musicians to strike up the chief’s favorite tune, "My Wild Irish Rose." Some say that was due to Scott’s fondness for the chief and others say it was to alert everyone within the area to the chief arrival so they could hide their liquor.

While a very talented musician who could play various instruments Scott's interest in music went beyond instruments as he began composing and arranging songs and gathering together other musicians to establish one of the most popular orchestras ever to play along the lower Mississippi River. By the 1920s, Scott had enlarged his band and had been swept into the blooming age of jazz. He became one of the foremost jazz musicians of New Orleans, but his influence on jazz music extended far beyond Mississippi and Louisiana.

Edgar Simmons Jr. tells it best in an article written for the Natchez Times newspaper about 1940, several years after Scott's death.

"Bud Scott was a product of the sweat-drenched Dixie river towns, and jazz flowed out of his mouth and fingers, out of every wide pore of him, like honey out of a barrel. He played pure, foot-pattin' Dixieland jazz like it's on tape nowhere," Simmons wrote.

"Bud sang on the galleried second story of the Natchez Confectionary on summer nights with a megaphone that his ham-like hand nearly swallowed. The gallery seemed to hang in the night sky and it dripped with the evening dew."

Scott's house still stands at 1011 North Union Street, but has been remodeled to a great extent.

One unusual occupation Scott had was that he also worked as a hangman.