As it is told, Louise came to Natchez to be married. It's not real clear where she came from, but New Orleans is mentioned as well as some cities in the distant north. She came here by steamboat, landing at Under-the-Hill, a very busy but rowdy section of Natchez. It is said that Louise asked around for her fiancée, both Under-the-Hill and in the more refined part of town on top of the hill. 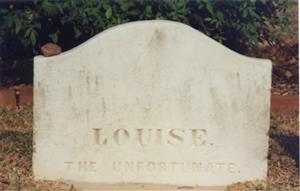 The story of Louise gets a little fuzzy and goes in a couple of directions here.

Other stories say Louise found her fiancée, but if so the story again spins into two areas. One is that they had a severe falling out and the other is that Louise discovered that he was married.

Whatever Louise's situation was it is pretty well accepted that after she found herself stranded in Natchez she held various respectable jobs. She worked as a housekeeper, seamstress and other jobs a respectable woman could perform. However, as the stories go, she gradually drifted to the notorious Under-the-Hill area working as a waitress in cafes and bars. As time passed she became a "Woman of the Night" at one of the many brothels Under-the-Hill.

It isn't clear, but some say Louise became friends with a doctor who treated her during her hard life Under-the-Hill, and upon her death he paid for her funeral. Some say a wealthy plantation owner who frequented her room on lonely nights paid her funeral expenses. Others say a preacher paid for her funeral from his pauper funds, but she wasn’t buried in a pauper’s grave.

Whatever Louise's story is she must have gained someone's attention because she received more than most destitute people of the period; she is buried in the Natchez City Cemetery with a tombstone, even though there is no date on the stone.

This gives you a little insight into Louise The Unfortunate.